If you live in Ulster Legislative District 16 (Towns of Gardiner and Shawangunk) and are wondering why you have not yet received your absentee ballot in the mail, it is because the Republicans here are following a pattern set by Republicans nationwide.  They are attempting to suppress the vote. 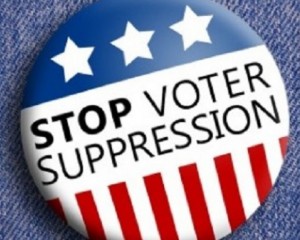 It’s a bit complicated but here’s how it’s going down:  At their caucus in early June, the Republicans nominated Kathy Miller to run for District 16 Legislator against incumbent Tracey Bartels. (Bartels is unaffiliated but caucuses with the Democratic members of the legislature).  Miller, it turns out, is a rural letter carrier and is legally barred from running for public office under the federal Hatch Act.  They realized this fatal error sometime around the middle of September.  However, the legal deadline to withdraw from the ballot after being nominated was July 25, as the Board of Elections needs ample time to get the absentee ballots printed and mailed to voters. See the problem? By the time they realized their error, it was legally too late to remove Miller’s name from the ballot.  She was putting her job in jeopardy by being on the ballot and if she won she would not be able to serve.

So the Republicans hatched a scheme to circumvent the law.  They showed up at the Board of Elections on September 28, two months past the legal deadline, with bogus paperwork to illegally substitute Kathy Miller’s husband, Jim Miller, for their legally barred letter carrier candidate.  They were betting that the Democratic Elections Commissioner, Ashley Dittus, would go along with this scheme. She did not.  Since then, Tom Turco, the Republican Elections Commissioner has refused to certify the absentee ballots with Kathy Miller’s name on them in compliance with election law.

Here we are in late October and no voter in District 16 has an absentee ballot available because the Republicans are holding them hostage unless we go along with their illegal plot.  The Democratic Party has gone to court to force the Board of Elections to get the ballots certified and mailed.  During an attempted mediation of the dispute, Republican boss Tom Turco allegedly said, “I don’t care if no one in District 16 gets to vote absentee this year.”  Knowing that a majority of absentee voters in the district are Democrats, they are refusing to comply with the law.  We are doing everything we can to speed up the court case, but it is still pending. We will keep you updated.

This week, in a brazen PR move designed to apply pressure on the Democratic Party to acquiesce to their illegal scheme, the Republicans issued a press release filled with misinformation, including the bogus allegation that it is the Democrats who are trying to disenfranchise Republicans by opposing their new chosen candidate for county legislator.   Like so much from Republicans in the age of Trump, this is pure nonsense or “fake news.”

Local right-wing “eccentric,” Pam O’Dell, has been posting this Republican fake news in various places, including on the Town of Gardiner Facebook page. We felt it was important to set the record straight.

2017 is the year to reject Trumpism in all of its forms and in all of the places it rears its ugly head, including Gardiner and Shawangunk.

Vote Row A on November 7!