We lost Mike Kruglinski on Monday, February 3.  Mike served as Chair of the Gardiner Democratic Committee from 2010 until last summer.  Mike led the GDC during a period of increasing influence of the committee in electoral politics locally and Democratic domination generally across the county.  Mike was involved in practically every political discussion in Gardiner since “Save the Ridge” in the early 2000’s. The following is a statement from Mike’s family: 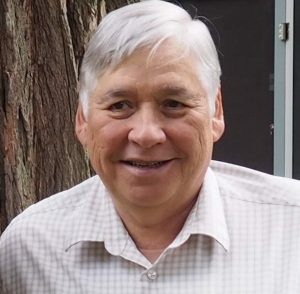 , February 3rd, we lost Mike Kruglinski, our quiet hero, after a 5-year long battle with prostate cancer.  With “Let It Be” playing in the background, he transitioned peacefully, surrounded by family who loved him dearly. While we are profoundly sad and will be grieving for some time, we are also enormously proud of who Mike was, the wonderful life he led, and the things he accomplished.

The second of four children born to parents who died very young in life, he provided leadership beyond his years to his younger siblings as they grew.  He was an academic scholar “wiz-kid” (North Bergen High School Class of ’67) who chose a proud union working-class life as a freight railroad conductor, husband, big brother, and dad over anything else he could have been.  He was who he wanted to be and that was someone with a gentle look, an open mind, a helping hand, a smile and consistent good cheer for the large majority of days and thousands of souls he touched during his time on this earth.

He married a beautiful woman, Diane Stromenger, who loved and stood by him as a faithful companion for almost 48 years.  She took care of him every single one of those days and was the rock that Mike depended on.  He and Diane had two wonderful kids, Michael Francis, and Kathryn Ann.  Mike and Diane raised them to be just as hard-working, conscientious, and good-natured as they were. Both children married great people who have become very natural extensions of the family (Melissa Vatalaro and Ryan Ehrhart, respectively) and gave their parents four beautiful grand-children, Lucas and Travis (to Mike and Melissa) and Addison and James (to Katie and Ryan).  Mike reveled in his growing family and they learned from him what it was to be an exemplary parent and grandparent (affectionately known as “Baba” and “Grandpa”).

Mike and Diane were also travelers—the ocean cruise being their preferred mode.  Over the years they took 43 cruises, wined, dined, and saw much of the world together, with family, and a retinue of good friends they were always in the habit of making and keeping.  They not only had a good time; they WERE a good time.  Birthdays, weddings, holidays, barbeques, vacations at the shore; there was always something to look forward to.

A railroad reorganization brought Mike and his family from their homestead in Bloomfield, NJ to Gardiner, New York in 1999, where Mike—always a walker—became an avid hiker in the nearby Shawangunks.  Nothing better than a good 5-mile hike in the woods, some stunning views, and a cold beer afterward to settle one’s soul.  He was solitary by nature, but you would never know it unless you knew him well because Mike was always such a joy to be with. Nature gave him this solitude as did an endless immersion in literature. He was a lifelong learner and voracious reader since childhood.  All kinds of books, magazines, publications, and multiple newspapers were a regular staple. Reading was a passion and respite.

Mike took up civic action in his retirement, having been passionate about social justice and politics since his college days protesting the Vietnam war.  For the last decade, as Chair of the Gardiner Democratic Committee, with Barbara Sides as Vice-Chair, he helped the Gardiner Democrats elect many great candidates and gained a reputation across Ulster County for his intellect, dignity, sharp political instincts, and thoughtful counsel in campaigns.  His loss is a significant blow to his community.

There will be no viewing or immediate service as Mike chose to donate his remains to medical research.  We will announce an event to celebrate his life in the near future.

In lieu of flowers and other tributes, please consider making a contribution to any of the following three organizations, each of whose causes Mike was passionate about:

The following is a statement by Kevin Cahill, our Democratic Assembly Member:

Mike was more than just a Democratic activist.  He brought a special sense of purpose to the Gardiner Dems and insisted on a civility so often lacking in politics.  His embrace of community causes and his elevation of the Gardiner Committee to advance those matters was unique among local leaders.  His energy, along with Barbara’s ushered in a special era that not only made electing qualified Democrats easier, it also attracted so many more good ones to the fold.  Gardiner Democratic committee meetings were thoughtful community-based events.  We all knew we had better come prepared!

Mike boasted, and rightly so, that three of our county leaders hailed from the “Greater Gardiner Area”.  Tracey Bartels still provides unique leadership in her role as Vice-Chair of the County Legislature and did so with grace and style as Chair.  Pat Ryan is bringing us progressively forward in his role as County Executive, first introduced to many area Dems by Mike as “Gardiner’s native son” when Pat was running for Congress.  And of course, Juan Figueroa, a resident of that great Gardiner suburb of Plattekill, was warmly welcomed and introduced to our party by both town Democratic leaders.  Mike was intimately involved in advancing each of those fine individuals.

Back home, Mike made sure that the committee members shared and advanced the values of their community, resulting in successes in town and other races.  And when Gardiner Democrats celebrated, the party was always special.  From intimate gatherings to giant picnics, Mike made sure that all were invited, all were welcome and that our causes were never took a back seat to great refreshments.

His sense of community, his commitment to progressive values and, most of all, his gentlemanly way are just some of the reasons Mike was a giant among us.  The memory of his contribution to making where we live a better place will only grow.  He was an example for all to follow.